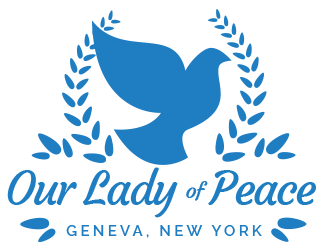 Our Lady of Peace is one parish with two sites in Geneva, New York: St. Francis deSales Church on Exchange Street and St. Stephen’s Church on Pulteney Street.

The following is a brief history of each church:

St. Francis deSales Church began in 1832.  The first Catholic Mass in Geneva had been celebrated in a house.  Rt. Rev. Bishop DuBois of New York donated $100 towards the purchase of a lot, and a further donation of $130 to aid in the construction of a new church.  The cornerstone of the new church, originally called, “St. Peter’s Church of Geneva”, was laid in May of 1832 and a dedication was held in October of 1834.  The original building was 45 feet by 40 feet. The foundation of that original church is included in the nave of the present church.

From 1832 to 1838, Fr. O’Donohue built up and governed the church.  He was succeeded by Rev. Connelly, during whose time the church was blessed and dedicated to St. Francis deSales as patron, by the Rev. Dr. Power, Vicar General to Bishop DuBois of New York.

Several other pastors were appointed in the 1840’s, and in 1844, property for a rectory was purchased. In 1847, Bishop Timon of Buffalo visited the parish and expressed his sorrow at its unfinished state, lack of funds, and debts.  Shortly afterwards he made St. Francis deSales Church the center of a mission and appointed Rev. Bradley its pastor. The first records of baptism and marriage were from September of 1848.  In 1851, under Rev. Michael O’Brien, a collection of $123 was taken up to build a rectory.  After Bishop Timon delivered a lecture, more donations came in, including a $20 donation from Governor Hunt.

In 1851, money was raised for the parish by sponsoring a steamship excursion on Seneca Lake, aboard the Ben Loder.  1853 was a year of progress when the parochial school system began in the basement of the church, land for St. Patrick’s Cemetery was purchased, and a circulating library was begun. From 1858 to 1890, Rev. James T. McManus was the pastor, and in 1864, he began the construction of the present church.  The steeple was added, and also the transept, changing the box-like brick building to Greco-Roman architecture.  Records show that the total cost was $30,000.  Cardinal McClosky, then Archbishop of New York, officiated at the dedication on July 28, 1867.  Soon afterwards, property for a school and convent was purchased and in 1873, the cornerstone of the school was laid.  Smaller additions to the church were added in 1893, 1921, and 1934-35.

Fr. McManus was succeeded in 1890 by the Rev. William A. McDonald, who enlarged and beautified the church; adding new altars, pews, pulpit and confessionals, and putting in stained glass windows. He also imported and installed the Stations of the Cross.

Several destructive fires occurred at St. Francis; one in 1940 was in the grammar school and classes had to be held in the former Lewis Street public school.  During the war years, fire also burned the front of the DeSales High School.  In 1965, there was extensive damage in the church itself due to a large fire.  Masses were held in the elementary school, deSales High School, and Shine’s Theatre.  In redecorating, the interior of the church was changed greatly.  On Palm Sunday, 1966, renovations were completed and the church reopened.

Under the Parish Pastoral Plan, commemorated in 1998, the “Roman Catholic Community of Geneva” was formed, linking St. Francis deSales Church with St. Stephen’s Church – one staff would be formed, Religious Education and other programs would combine, all living spaces for the priests would be moved to the St. Stephen’s Rectory building, and all staff offices for both churches would move to the St. Francis Rectory building.

In 2007, the “Roman Catholic Community of Geneva” formed one incorporated parish, “Our Lady of Peace”, with two sites.

Rev. William McDonald selected and purchased the site for the future St. Stephen’s Church, on the corner of Pulteney and High Streets, for $8,000.

The style was Gothic with 2 square towers of equal height.  The exterior was constructed of limestone with a tile roof and the interior was stone and Ohio pressed brick. The hand-carved woodwork was done by Isaac Kirchmayer, a native of Oberammergau.  The Rood Beam, made of oak, reads, “Christum Regem Crucifixum Venite Adoremus” (Come let us adore Christ our crucified King).  The large painting in the center of the main reredos is, “The Martyrdom of St. Stephen”, painted by Frederick Wilson of Briarcliff Manor, New York.  The Stations of the Cross are from the Joseph Sibbel Studio, New York.  The large statues in the sanctuary are the four Evangelists; Matthew, Mark, Luke, and John, with their symbols.  The 12 pillars in the body of the church represent the 12 apostles; each one has a shield carved with a symbol of the individual apostle.  Over the main entrance is the large, “Tree of Jesse”, window that illustrates the genealogy of Christ from the royal house of David.

In 1916, construction on the St. Stephen’s School began.  It opened in 1918.  The original “Church Home” was across High Street, and that was used as a rectory and for social functions until 1923, when several houses on Pulteney Street were demolished to make way for the new rectory site.

In 1995, Monsignor Gerard Krieg opened the Perpetual Adoration Chapel at St. Stephen’s Church, in a space that was originally an auxiliary sacristy and choir rehearsal room.  This private place for prayer saw people coming from many areas to pray 24 hours a day, 7 days a week.

In 2000, St. Stephen’s was named as one of 5 diocesan pilgrimage churches for the Jubilee Year.

Under the Parish Pastoral Plan, commemorated in 1998, the “Roman Catholic Community of Geneva” was formed, linking St. Stephen’s Church with St. Francis deSales Church – one staff would be formed, Religious Education and other programs would combine, all living spaces for the priests would be moved to the St. Stephen’s Rectory building, and all staff offices for both churches would move to the St. Francis Rectory building.

In 2007, the “Roman Catholic Community of Geneva” formed one incorporated parish, “Our Lady of Peace”, with two sites.